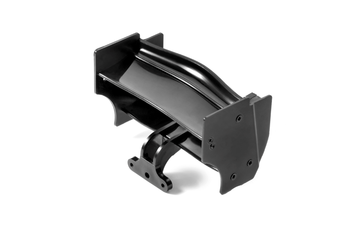 The wing is assembled via the rear wing mounting system which features a graphite mount and aluminum stands. Using shims between the wing and the alu stands, the position of the wing can be easily adjusted for various track conditions. The height of the wing can be adjusted by changing the mounting position on the graphite plate. The rear wing has adjustable downforce by the use of an optional insertable middle wing rib.