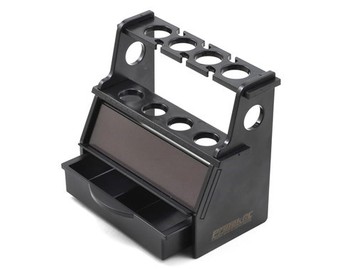 The ProTek R/C Shock Stand is a great addition to any enthusiast's tool box. At first glance, this shock stand looks like others you may have seen, or maybe even already have in your tool box. But, the ProTek shock stand is indeed unique!

But, its the removable lower drawer that makes this shock stand different from the rest! The drawer has two compartments that are a perfect place to stash your o-rings, pistons, shock ends and other small shock components during a build or rebuild.